Role of the US, Japan, India and other democracies

Containing The China Onslaught: Role of the US, Japan, India and other democracies. This book by Pradip Baijal provides an insightful look at the miraculous Chinese growth story between 2005 and 2015 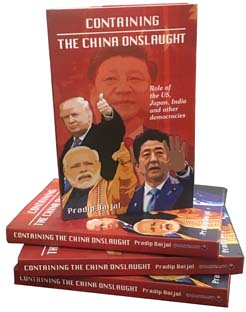 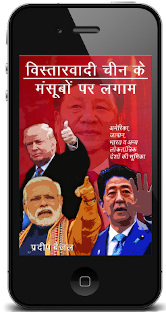 Containing The China Onslaught: Role of the US, Japan, India and other democracies is a book with a special relevance today both for the world and India. It provides an insightful look at the miraculous Chinese growth story between 2005 and 2015, presenting hard-hitting facts on how China’s GDP has overtaken that of the US, and is currently five times that of India. It unfolds how after being in the same league as India as illustrated in the Goldman Sachs’ BRIC reports of 2001 and 2005, Deng Xiaoping, the paramount leader of the People’s Republic of China and the architect of China’s market economy reforms, planned and implemented policies for China’s growth. Through archives now available in the public domain, the book reveals how the US and the world’s financial institutions aided and abetted this growth. Quoting extensively from widely acclaimed geopolitical observers, researchers, think tanks and academics, the author lays bare the stark reality of why and how an expansionist, feudal and non-democratic China is moving stealthily and surely towards devouring its traditional enemies – Japan, India and the US – and bringing fruition to its 100-year-old plan of re-gaining its hegemony in the world. The book calls for strong leadership and suggests bold reforms that need to be taken to halt China’s stealthy steps towards maritime and land colonization of south Asia through its offers of infrastructural aid to underdeveloped countries. It cautions the western world against the immediate dangers of world institutions being lax on rules and regulations. It urges speedy efforts to override China’s near current domination over 5G technology and the consequent access to inner workings of governments.

As a way forward, Baijal proposes a coordinated strategy in the present digital/disruptive world for India, Japan and the US which hinges on the three countries working together, as China and the US did between 1960 and 2015.

Praise for the book

“We finally have a well-researched and an eminently readable book on China, offering a much-needed Indian perspective on that country . . . It plots the incredible trajectory of China’s growth over the last four decades and offers uncommon sights into the key drivers underlying it, encompassing political, economic and geopolitical factors. The author’s critique on India’s lost opportunities will stimulate a welcome debate and that is a compelling reason to read the book.”
– Shyam Saran, Ex-Foreign Secretary

“An incisive, timely and a reform practitioner’s account of China’s recent massive growth/reforms, and its complexities . . . a must read for all policy makers who will need to successfully navigate the national economy when the global economy is facing increasingly strong and easterly winds.”
– Vijay Kelkar, Ex-Secretary Petroleum and Finance, Chairman Finance Commission, Govt of India

“Crises should challenge countries to rise. The looming Chinese hegemony is one such for India and the world. Baijal is not a pessimist. He argues that India can learn from China’s long-term approach and work with similarly interested countries to moderate the impact of hegemony. An original and masterly treatment worthy of debate.”
– Rahul Mukherji, Professor and Head, Department of Political Science, & Deputy Executive Director, South Asia Institute, Heidelberg University; Co-Chair: India-China Workshop Supported by Fudan University, Shanghai; University of California, Riverside; Heidelberg University, Heidelberg.

“The author identifies the key essence from a plethora of detail and shares a number of significant insights on major issues to enrich our perspectives, enabling us to re-evaluate our previous experience and develop future options for development. He identifies the gaps to be addressed in national and international initiatives, the strengths that equip us to address them, and the solutions and practical steps that give us concrete options for nation-building.”
– Harsha Vardhan Singh, Ex-Deputy Director General, World Trade Organization; Secretary, Telecom Regulatory Authority of India

“In this book on China’s unrelenting rise as a superpower, economically as well as, militarily, Baijal’s view that India needs to actively coordinate with other leading market economies like Japan and the US, if it wishes to emerge as an economic superpower, makes compelling reading. India’s policy makers and thought leaders would surely benefit by constructively engaging with his views, even if they may not fully concur with them.”
– Ashok Nag, Former Advisor, Reserve Bank of India

Pradip Baijal, 1966 batch of IAS, trained in reforms from IDACA, Tokyo (agriculture reforms), Oxford and Harvard Universities. During his illustrious career, he worked on soybean and forest produce marketing, reforms in cooperative societies, privatization, telecom and oil & gas reforms. He also worked with the International Telecommunication Union (ITU) and the World Bank in many countries in these sectors.

He held senior administrative positions in the Ministries of Finance and Industry, Government of India. As the first Secretary of Disinvestment, GOI, from 1999 to 2003, he formulated the entire gamut of rules and regulations for privatization in India. A graduate in Mechanical Engineering from IIT Roorkee and a visiting fellow at Oxford University, he was Chairman of the Telecom Regulatory Authority of India (TRAI) till his retirement in March 2006. During his tenure, TRAI articulated and adopted pro-development and consumer-friendly regulatory practices and made several important and far-reaching recommendations on the growth of the telecom industry in India.

Baijal’s eventful career has been encapsulated in his earlier two books, Disinvestment in India, I Lose and You Gain (2008) and A Bureaucrat Hits Back (2016). Post retirement, he continues to provide strategic mentorship on reforms to leading companies in India and abroad through his consulting company.

Baijal proposes a coordinated strategy in the present digital/disruptive world for India, Japan and the US which hinges on the three countries working together, as China and the US did between 1960 and 2015.